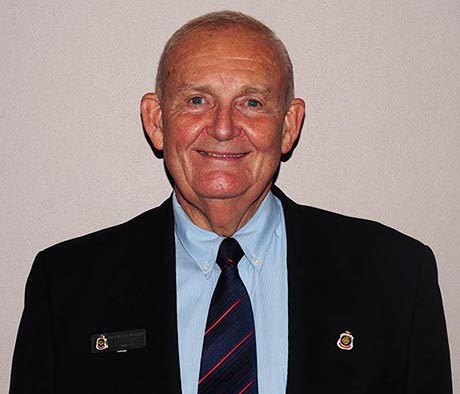 Bob served in the CMF, joining OCTU in 1964 and, upon graduating, was appointed to RAASC, serving for six years, intertwined with his travel industry employment. He was active in the travel industry for 55 years, initially starting in 1962 with Qantas Airways in Sydney, which then included postings in New York, London and Melbourne. In 1972, Bob was seconded by Qantas Airways to start a new company, Qantas Holidays, where he remained until 1982 as National Sales Manager.He then joined Sheraton Hotels and Resorts in Sydney, which in 2000 became part of Starwood Hotels and Resorts Worldwide, which in turn became part of Marriott International in 2015. By 2012, he had been over 30 years with Starwood, his last role being Director, Leisure and Luxury Sales, Asia Pacific, based in Sydney. This was followed by consultancy projects with Starwood/Marriott throughout Asia Pacific until 2017. In 2013, Bob was appointed a Judge of the 2014 National Travel Industry Awards, Australia’s premier travel industry annual event. In 2014, Bob was appointed Chief Judge of the 2015 Awards, which was renewed for 2016, 2017 and 2018 and 2019. 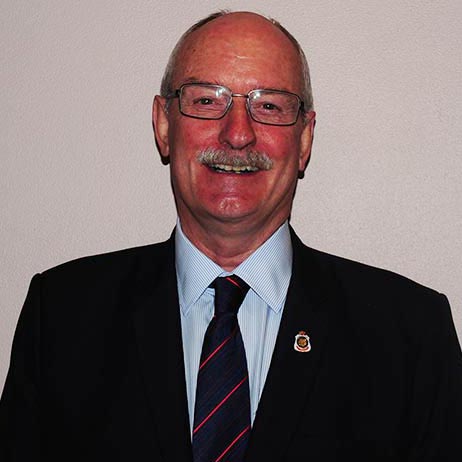 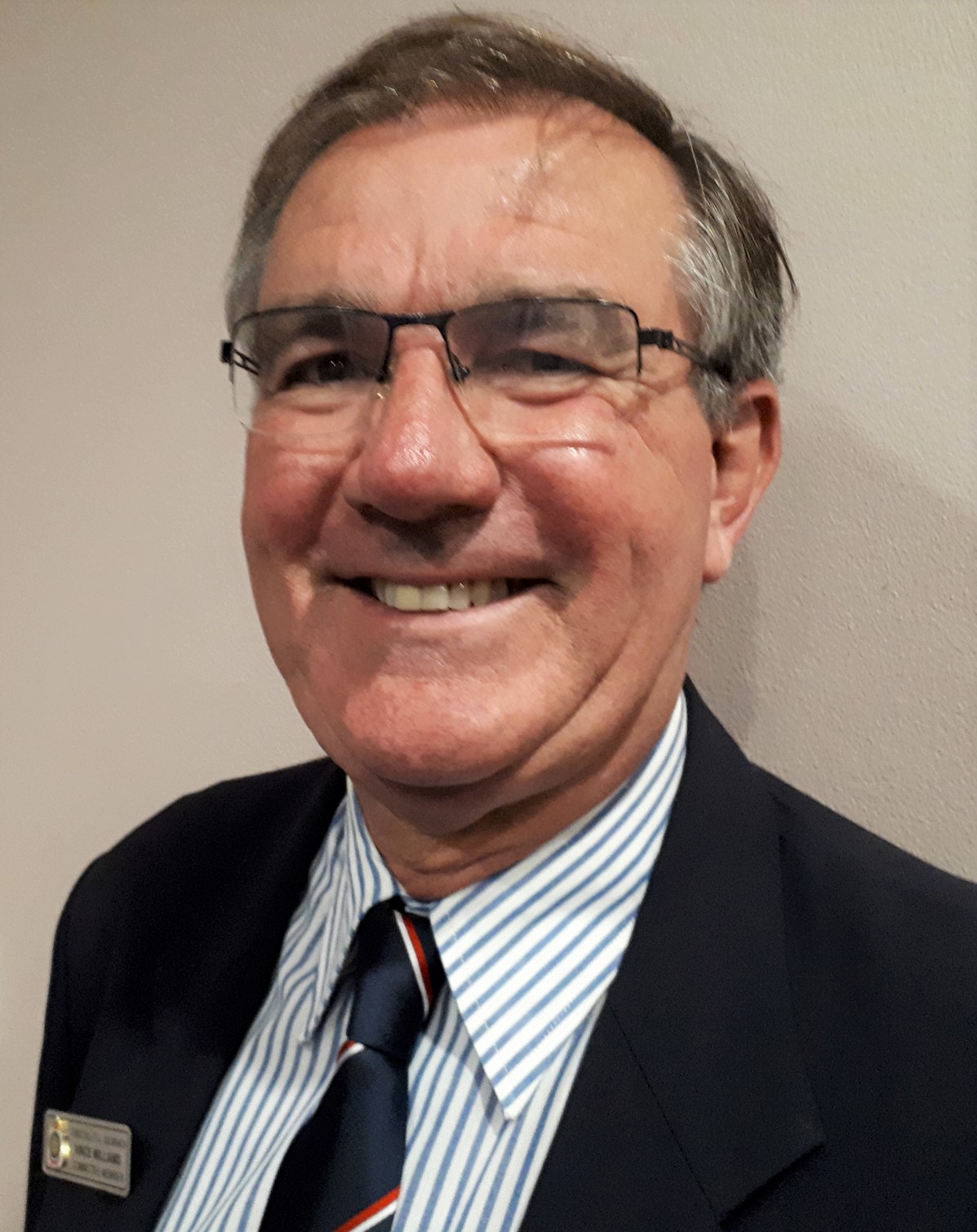 Vince enjoyed a 37 year military career until retiring in 2007 as a Brigadier, earning a Conspicuous Service Cross and Commendation for Distinguished Service. He served at School of Artillery three times, UK three times and East Timor as Anzac brigade commander. Since retiring from ADF, Vince has worked as a senior military adviser and as a lecturer at Macquarie University. He has a BA, MA, Grad Dip in Mgt, Grad Dip in TESOL, Fellow of Aust Defence College, Hon Fellow Macquarie University. Vince is Hon Sec RAA Historical Company, Board Member C4PICT. 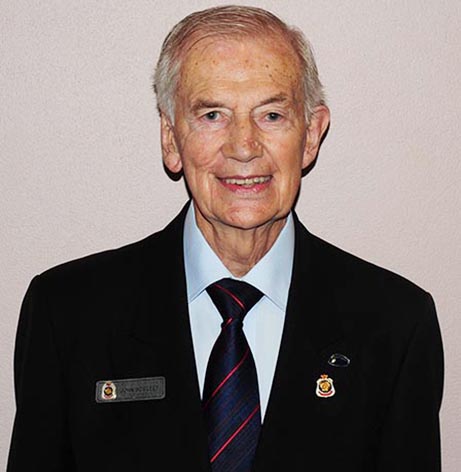 John grew up in Wee Waa country NSW and moved to Sydney after the outbreak of WWII. He undertook National Service in the RAAF in 1951/52 along with three years in Reserves. Following a career in wool buying and international trading, he moved to the banking/finance sector where he assisted in the introduction of Lease Finance to Australia then to a senior Bank Liaison/Business Development role with a leading finance company and major Australian bank initially in NSW then VIC/SE Australia. Upon returning to Sydney for family reasons, he moved into the Taxi business as an owner operator as well as serving as Chairman of Co-operative and Chief Delegate to NSW Taxi Council. Following a move to executive recruitment as Financial Controller, he then moved to a group of private education colleges as General Manager before becoming an independent management consultant to commerce, industry, State and Federal government entities.

John joined the sub-Branch committee in 2011 where he has served in many roles that include accredited Welfare Officer, AMC co-ordinator, Trustee, Treasurer, Vice President and President.

John believes a properly governed pro-active RSL movement can not only maintain but expand its role as the leading provider of welfare/benefits to both past and present ADF and allied forces members. 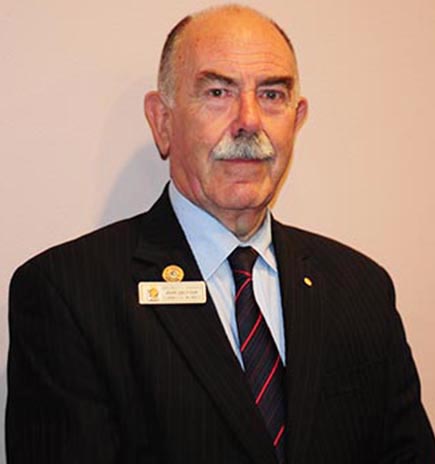 John worked 40 years for Reserve Bank and had 48 years army service with 7 Fd Regt RAA, Ares RCRT, HQ 8 Bde, HQ 2Div. He attained the rank of WO1. He is Secretary of 7 Fd Regt Assoc, is Senior Marshall at RSL NSW Anzac Day March Executive Committee, and was on organising committee for the Centenary of Anzac. If there’s any spare time left in his busy week, John is a volunteer groundsman at Belrose Public School and Wesley Gardens. And sometimes he travels to the family farm in Taralga. On Australia Day 2013, John was appointed a Member of the Order of Australia. 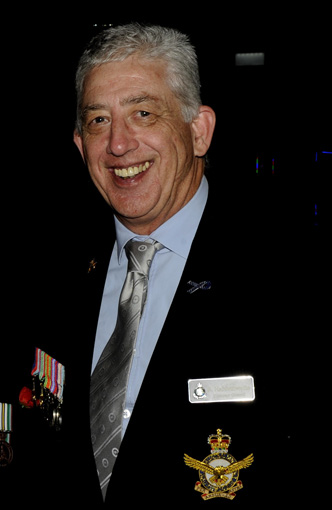 Stuart has always shown a keen interest in two areas.  The first being the RAAF and the other, motorcycles.  Whilst at school Stuart joined the RAAF Air Training Corps at Frenchs Forest that led on to become his career.  He joined the RAAF at 17 years and served at RAAF Richmond where he was regularly involved as an Observer for Sea & Air Rescues in the C130A and C130E Hercules aircraft.  After leaving the RAAF he joined NCR Australia where he educated himself in computer programming.  He then transferred to the IT department and progressed to become a Senior System Analyst.  During his 17 year career with NCR he also followed his passion for motorcycling through racing.  He progressed as a regular contestant in the Australian Superbike Championships culminating in the 1995 and 1996 World Superbike Championship rounds at Phillip Island.  Stuart left NCR and purchased a Kawasaki Dealership in Sydney’s Southern area.  He spent time as a member of NSW Race Racing Committee serving as chairperson.  Involved in Road Racing safety, Stuart had become the rider’s representative.  As a motorcycle dealer, he served on the MTA council as motorcycle delegate and also served on the Australian Road Staysafe Committee in 2004 and finished 2004 as the NSW MTA and Daily Telegraph Dealer of the Year.  In 2006, Stuart moved to law enforcement, spending 10 years working in NSW maximum-security jails and was a member of the NSW corrective Service Honour Guard receiving a citation for Dedication and Professionalism in 2011. 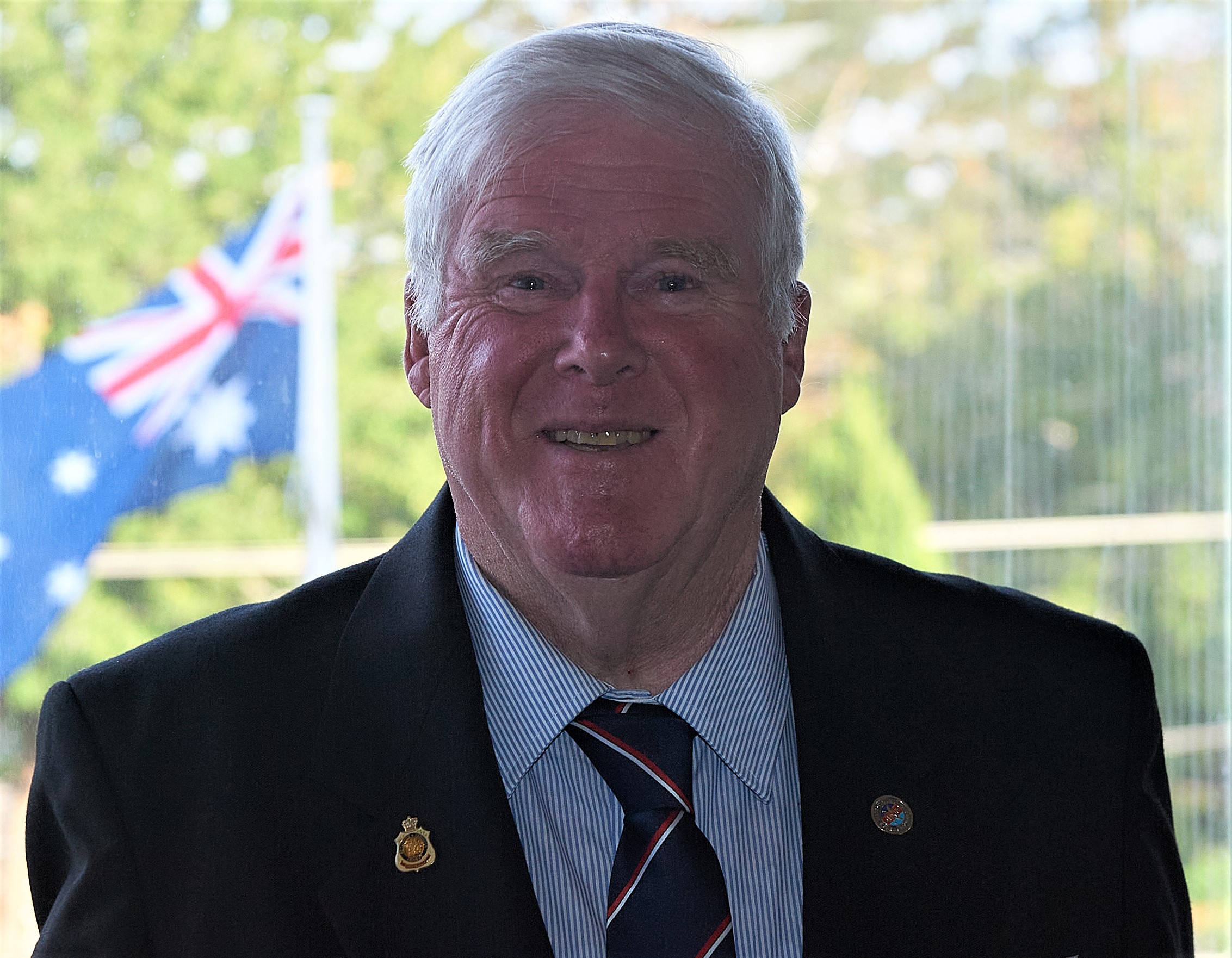 Peter was born into a Military family in Western Australia finally settling in Manly in 1964.  He served in the CMF, joining the Royal Australian Engineers from 1967 to 1970 and attaining the rank of Corporal.  He has lived in Forestville since 1974.  Peter was made a Justice of the Peace in NSW in 1978.  He has been a member of the Forestville RSL sub-Branch since 1993.  Peter was active in the building industry for nearly 50 years.  The last 15 years of his working life was as a Property Area Manager for FRNSW (formerly NSWFB) responsible for repairs and maintenance of over 100 Fire Stations in the Southern area of NSW. 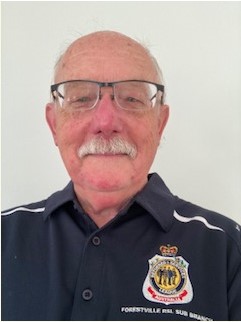 Conscripted as a National Service man in 1967, his service included a tour of Vietnam in 1968-69 as part of Headquarters, Australian Forces, Vietnam (Army).

Born in Germany after the war he migrated to Perth, Australia at the age of 3 under the post-war displaced persons program.  Having completed his primary education there he moved to Adelaide completing his secondary and tertiary education, graduating with a Bachelor of Economics Degree (B Ec.) from the University of Adelaide.  A resident of Davidson/Belrose since 1987 after moving from Adelaide, he joined the RSL in 1996.

Ted is a qualified Accountant and a Fellow Member of CPA Australia.

He has worked in both the Public and Private sectors.  His roles have been at line management and corporate level, in areas of Accounting; Strategic Planning; Marketing and Distribution; Warehousing; Supply Chain Management; IT Systems Implementation and Project Management.

Since retiring, he has continued to provide pro-bono services to a number of organisations and charities. 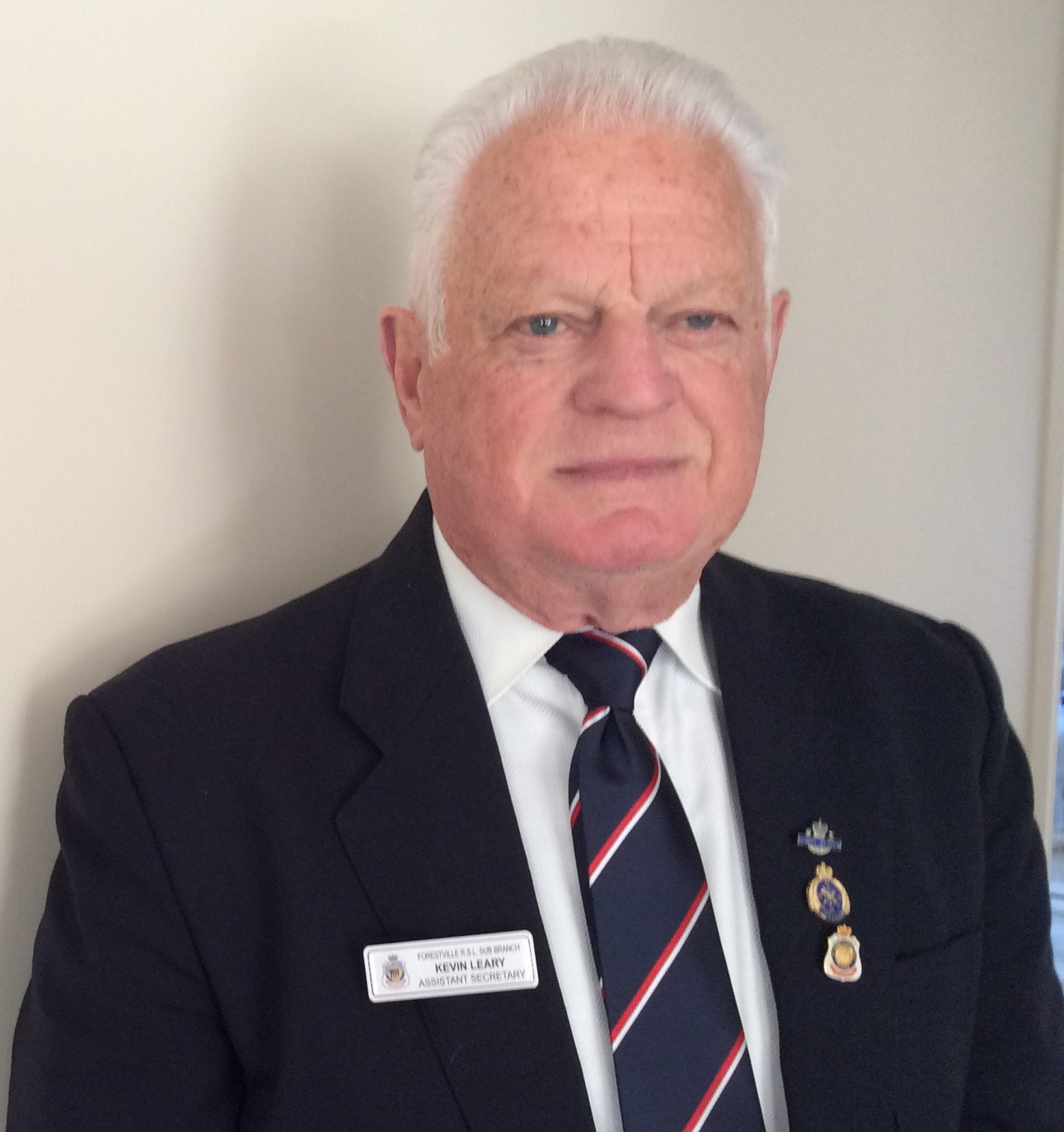 Kevin was born in Christchurch, New Zealand and shifted to Sydney in 1988 having been promoted with a clothing company.  Through the National Military Service, Kevin was balloted into the 7th intake and enlisted into Military Service in 1964 and was allocated to the infantry.  He served in 2 RNZIR Military Training for 3 years in  the Territorials.  On completion he was transferred to Class A Reserve until he was discharged in 1972.

Kevin commenced a career in the Grocery trade where he was awarded a Diploma of Merit and won a scholarship through a business management scheme operated by Four Square Grocery that financed him into his own business.  After six years of successful trading he sold the business and joined a South Island clothing manufacturer Sew Hoy & Sons Ltd as a company representative and later promoted to Division Sales & Marketing Manager.  Whilst in this position he was a judge in numerous fashion competitions as well as in selection as manufacturers representative on the New Zealand Standards Association Committee for the Safety of Children’s Nightwear from 1985 – 1987.  Sixteen years later he joined Tamahine Knitwear, a Dunedin knitwear manufacturer as Import/Export Manager for New Zealand and Australia markets.  He was later offered a position in Australia as General Manager with the company’s clothing Import Division.

Whilst in Australia following studies with the Australian Institute of Management, he achieved the title of AIMM.  Kevin has interests in a variety of sports and is a keen gardener, traveler and enjoys listening to good music.